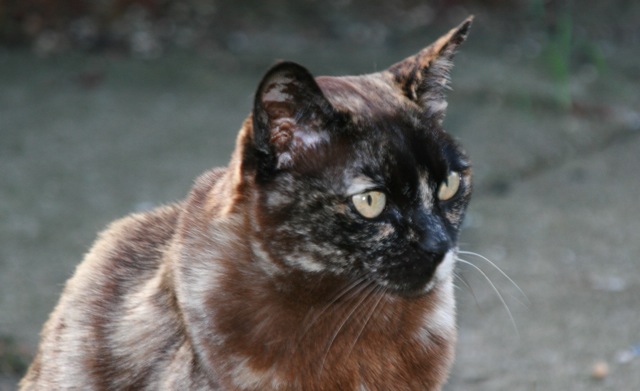 Daisy a Burmese cat who started clawing her tongue

These cats start clawing at their mouths and cheeks, sometimes severely harming themselves. “It looked like she was gagging or something was stuck in her teeth,” said one owner. “Then I came home later to find blood everywhere.” It is incredibly distressing both for cats and for their owners. Vets researching this behaviour call this Feline Orofacial Pain Syndrome or FOPS (Rusbridge et al., 2010).

I studied this syndrome for my BSc. Dissertation in 2010.  My owner survey showed that FOPS occurred overwhelmingly in Burmese and cats of Burmese ancestry (Tonkinese, Burmillas, crossbreds). The cats in my survey did not suffer from an unusual number of stressors. The behaviours shown by the cats included head shaking as well as face clawing, and owners did not find any treatment very efficacious other than cutting nails and pain relief.

There are four vets who specialise in FOPS  -Clare Rusbridge of the Stone Lion Veterinary Centre, 41 High St, Wimbledon village, London SW19 5AU ( www.veterinary-neurologist.co.uk): Sarah Heath of Behavioural Referrals, 11 Cotebrook Drive, Upton, Chester CH2 1RA: and Professor Danielle Gunn-Moore of the Easter Bush Veterinary Centre, Roslin, Midlothian, Scotland, EH25 9RG (www.felineclinic.org) and dental expert Norman Johnston of Dentalvets in Scotland (www.dentalvets.co.uk). I recommend asking your vet to refer the cat to these specialists as soon as possible. There is a information sheet here from Clare Rusbridge which would be useful for your vet.

FOPS may be similar to human orofacial pain and the cat’s behaviour is not unlike that of rats and mice with orofacial pain (Luccarinia , 2006). Headshaking in horses (which can’t paw their muzzles) may also have some similarities (Madigan & Bell, 2001, Mills et al., 2002). Humans also suffer from orofacial pain, including trigeminal neuralgia (Pawl 1997) and burning mouth syndrome (Muzyka &amp; De Rossi, 1999), disorders which are still not understood and for which there is little agreed treatment (Turp et al., 2007). Among humans there may be a hereditary component (Fleetwood, 2001) and even humans will sometimes self harm because of the intense pain (Mailis, 1996)..

IF YOUR CAT IS CLAWING ITS FACE

A diagnosis of “self mutilation”  does not explain the cause: it merely describes the symptoms. Feline Orofacial Pain Syndrome is the term that links the behaviour to its probable cause. Read this carefully if you have a cat with this troubling problem.  Some cats lick in an exaggerated way or claw at their mouths or inside their mouths till they bleed. Some will pull the skin and fur off the whole of the side of the face or rip their tongues.

When a cat starts clawing at its mouth, the most obvious explanation is oral or dental pain. Therefore this is the first possibility, which must considered. However, in some cases repeated dental examinations and removal of some or many teeth may not stop the behaviour and bad dental work may provoke it. So a specialist dental vet is a must if dental work is to be done.

The syndrome was first mentioned in 1994 (Roche, 1994) and I wrote about it in my then Daily Telegraph column a few years later. It seems there are episodes of this behaviour, separated in time sometimes by years; or for some cats the behaviour is continuous. It may start in kittenhood at teething or vaccination time. Adult sufferers are more common than kittens.

The mysterious face clawing behaviour seems to occur mostly in Burmese, crossbred Burmese, and breeds with Burmese ancestry such as Burmillas and Tonkineses. It is probably an inherited disorder.

IF YOUR CAT HAS THIS PROBLEM

You will need to make sure the vet investigates thoroughly, particularly the question of facial pain. Read Clare Rusbridge’s information sheet at  www.icatcare.org which you can find from the search button. The case of Pepper (below) shows that vets, unfamiliar with the problem, may fail to give a proper dental and mouth examination under anaesthesia. This is essential. A specialist dental vet should be involved (see no 5) if dental work is required.

The following possibilities may trigger FOPS and need careful consideration.
1. Dental problems.
2. Mouth ulceration (common during cat flu or after cat flu vaccination) or gingivitis.
3. Teething in kittens.
4. Facial pain of some other kind. (In humans facial pain can be caused by muscle spasm sometimes set off by unconscious tooth clenching due to stress. Trigeminal neuralgia is agonising stabs of pain often caused by a trigger spot on the facial skin being touched and usually self limiting. Possibly these apply to cats.) Even a facial infection or wound might start the clawing.
5. Dental work. Sometimes very minor dental work such as a scale and polish may set off the syndrome. But too much or poorly done dental work is more likely to start if off – this is why a specialist dental vet should be involved from the start.
6. Stress. This has been proposed as a trigger for onset.

Pain relief is essential while undergoing treatment. Indeed pain relief may be the treatment. See lower down for vet’s opinions on treatment. Your vet may give you painkillers to use in an emergency.

Failure to eat is a real danger. Make sure this is addressed from the start. Ask about syringe or tube feeding -see the case of Pepper. Liquidise soft food so that the cat does not have to chew. Feed kitten food (high in protein) or a prescription diet if the cat has been anorexic.

Helpful short term measures may include bandaging the paws so that the cat cannot harm itself or use of a buster or Elizabethan collar. Cats need to groom themselves and cannot in a collar, so you must groom the cat at least twice a day while it is wearing this. These should be short-term not long term measures and pain relief should always accompany this.

Euthanasia should be considered if you think your cat is in unrelenting and continual pain.

After examination and proper treatment of any medical or dental causes, it is worth looking at stress.  If nothing else, reducing stress will help your cat in recovery. Look at this FAQ also on this website, Reasons Why Your Cat is Stressed.  While you are pursuing treatment get a Feliway Diffuser (which lasts a month) that promotes calm in the household. Reducing stress can do no harm. To diagnose stress factors properly you need a cat behaviour expert. Remember that indoor cats need an enriched environment and that multi-cat households, especially with unrelated cats, may be very stressful for some of the inmates.

Sarah Heath, Clare Rusbridge, Professor Danielle Gunn-Moore and dental expert Norman Johnston, vets have published “Feline orofacial pain syndrome (FOPS): a restrospective study of 113 cases’ in Journal of Feline Medicine and Surgery, see reference list.  Examination for oral or facial pain is essential and proper pain relief is important. They report that NSAIDs are useful for mild attacks (these must be prescribed by a vet; used wrongly they poison cats), and gabapentin or carbamazepine for severe cases. This can be injected for immediate relief. A few severe cases may need lifelong drug treatment with regular liver function tests.

Norman Johnston of Dentalvets in Scotland (www.dentalvets.co.uk) likens this behaviour to trigeminal neuralgia in humans (agonising unexplained facial pain). “I saw cases where there was undoubted pathology, particularly those involving the lower jaw, which I could do something about. Causalgia is a condition whereby injury to a sensory nerve, most commonly during a difficult tooth extraction, appears to be the reason. Trigeminal neuralgia in adult humans has similar features but the reasons for these attacks in humans have also been a mystery for several centuries.”

Sometimes cats show anxiety before an attack. This may give owners time to give them drugs to reduce the onset of pain or bandage paws to stop claw damage. Never used human painkillers; alway use medicines prescribed by a vet who is familiar with your cat.