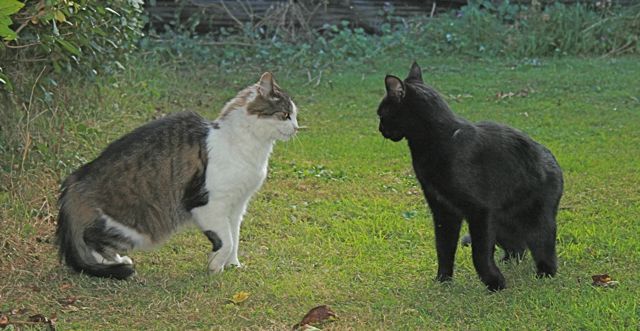 The body language of aggression: these cats dislike each other

DOES YOUR CAT NEED A FRIEND?

Cats do not necessarily want a new friend. Some are natural loners and don’t like other cats at all. Others don’t want the friend you choose for them. I mean, would you like somebody to put a stranger in your flat and say you’ve got to flat share with them. Cats are not as social as dogs. They don’t eat together. In nature, females would live together in family groups: yet we ask unrelated cats to share a home (Crowell-Davis et al., 2004).  If you just plonk a new cat in your home, the resident cat may well attack it (Levine et al., 2005). Once a fight has broken out, cats will dislike each other and it is difficult to change their attitude (Lindell et al., 1997).

Your responsibility should be primarily for the cat or cats already in your care. Think hard before asking an very elderly cat to put up with a new companion. Kittens will be accepted better than an adult cat, but kittens often pounce on and pester old cats. Some old cats will mother a kitten; others (like my eight year old Mog) definitely won’t! It can take months and months for harmony and sometimes the cats will never be friends. Cats which are used to a multi-cat household may be less upset than a cat which has lived alone for a long time but we don’t know for sure. Get a kitten from a cat shelter, which will promise to take it back if the introduction really doesn’t work out. Neutered female cats may be less likely to be aggressive than neutered males (Lindell et al., 1997).

Be careful about accepting the local stray into your home. Ask yourself if an existing cat should have to put up with a former stray, who may bully her/him. Also you need to have the stray tested for Feline immunodeficiency virus (FIV), so that it does not pass this on to your existing cat or cats.  Think in terms of quarantine until the new stray is vaccinated and make sure all your cats are vaccinated before the introduction.  In the case of a stray cat, you can feed it outside, then when it is tame enough to be picked up or trapped  find it a new home via the Cats Protection, Wood Green or the Blue Cross.

THE INTRODUCTION SHOULD BE SLOW

A week before the introduction, two Optimum Feliway Diffusers should be installed in the house. One should be in the existing cat’s favourite area and one should be in the room into which you will be putting the new cat or kitten. The idea is to give both cats their separate core territory with this calming scent in it. (Don’t ask them to share the Diffuser. It must be one each). Your aim is not to make these cats become friends: merely to avoid aggression until they have learned to tolerate each other. You can use Feliway Friends diffuser for shared areas.

Shut doors windows, and block chimneys before letting the new cat out into the room. If possible add a retreat place like a covered cardboard box with entrance hole, a roofed cat bed, or a cage-den . Put familiar toys (if available), feeding bowls etc. in the room. Put litter tray in the room. This has got to be a safe place for the new cat. Let the resident cat sniff under the door of the room where the new cat is installed.

Mix smells. From the point of view of a cat, anything which smells strange is an intruder. Label cloths with the name of each cat, keep in separate plastic bags, wipe the cloth on the named cat, then present it to the other cat, wrapped round your hand (Bowen & Heath 2005). Let the other cat investigate this but do not force contact. Now mix the scent of the cloths. Wipe these on the resident cat and the new cat, then rub this in the  resident cat’s territory and the new cat’s room at chin height.

If each cats seems to accept the smell of the other, then give the new cat something to sleep on which smells of the old cat and visa versa. Keep swapping. Use same grooming tools on both cats – do not clean the brush between each cat so that their fur gets mixed. Or if enough fur comes off with the brush put it on the other cat. Pet one, then go to next room and pet the other using fine cotton gloves. Transfer a little used litter from the new cat tray to the old cat’s tray and visa versa to mix smells.

When the resident cat is shut away, let the new cat explore the house. Rotate rooms for each cat, if you have enough rooms. Next, let them see each other by putting wire mesh across the doorway to the new cat’s room or see each other through a glass door. Two babygates, one on top of the other,will also work. (Two because cats can simply leap over one).If you are good at DIY you can use transparent shelving from IKEA stuck together or make your own screen door. It involves making a rectangle frame, adding insert hinges to the screen door and the original door frame, then fixings to the screen so that the screen door can be secured. Or you can buy a simple door hook and fix it so that the door is held very slightly open with the hook but neither cat can get in or out.

If they remain calm, give treats/food to reward them but leave plenty of space between the treats given to cat A and those given cat B.  Play games with each cat. These visual introductions should be short and frequent. Both cats should be able to retreat.

If the cats remain calm, then they can have short periods of being in the same room – always supervised. If it looks as if there is going to be fighting separate them before this happens. As soon as they are calm, then supervision may cease. Both cats should have their own core areas so keep the litter tray, food bowl etc in the newcomer’s room. The aim is not to get the two cats living close to each other, merely to let them easily avoid each other.

Aim at allowing them to live separate lives, in the same house for as long as they want to. For two cats make sure that there are at least two feeding stations – cats do not enjoy feeding close to each other. There should be three litter tray locations. Each cat should be able to eat and eliminate without having to worry about the other cat ambushing it. . There should be several cat beds and cat resting places

Some cardboard boxes with entrance holes cut out,  as a retreat, may be helpful for nervous cats (Carlstead et al., 1993). Try to provide a retreat area in places where they have to pass each other: for example,  a chair on the landing so that one cat can jump on to it while the other passes. Two cat flaps in two different locations may be helpful too if one cat is blocking a flap.

Accept that that the new cat and the old cat  may never be friends. If they tolerate each other, that should be good enough. Try to make sure they both have safe places to retreat to. But if one cat is seriously bullied — not able to eat without being hassled, ambushed on its way in and out of the litter tray, harassed in its cat bed, spending all its time under the bed, then think of rehoming.