If local cats are coming in through your cat flap, they may be looking for food. So do not leave food down during your absence. Feed your own cats at set times and pick up any uneaten food. Or leave food down in an upstairs room where the invading cat is less likely to find it.

If the invading cat is an un-neutered cat, or a starving stray, ring your local Cats Protection, and see if you can help them catch and rehome him. Even if the cat has to be put back into the wild, once it has been neutered it is often less aggressive (Finkler & Terkel 2010).  If the neighbourhood bully is not neutered but has a home, ask the owner to neuter him.

Some neighbourhoods have an awful lot of cats – both pet cats and feral cats. Sometimes neighbouring cats work out a way of living together, which is upset by the arrival of a new cat on the block (Heath 2009). This can create fear and anxiety in your cat, resulting in territory marking, inability to relax, frequent abcesses from fighting, etc. 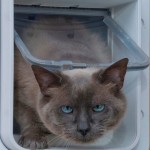 You can now stop the neighbour’s cats coming indoors and terrorising your cats in their own house. There are cat flaps that work off your own cat’s microchip. There are three: Sureflap (runs off batteries),  Petporte (runs off the mains) and Cat Mate. Sureflap also produce a larger flap for big cats or small dogs. Microchip cat flaps should stop strange cats coming indoors and they do not require a collar. I personally worry about collars on cats.

Protecting your cat from a neighbourhood bully is not easy. Claire Bessant of the Feline Advisory Bureau (www.icatcare.org) suggests “See if you can negotiate a time-sharing agreement with them, so that they keep their cat in for an hour, say, when you get home from work, so that you can let your cat out then.”

Give your cat some safe time by closing the cat flap at night. It is preferable to keep cats in at night anyway — most cats are killed on the road at night. Dawn and dusk is when neighbourhood cats are most likely to be active (Heath 2009) and when wildlife suffers from hunting cats. If necessary, keep the cat flap closed all the time and let your cat in and out at times you can bodyguard her. Or make your cat into an indoor-only cat.

MAKING YOUR GARDEN SAFER FOR YOUR CAT

Your cat can be intimidated by other cats staring in through windows. If necessary, block your cat’s view of the garden using a glass spray like Humbold Etchspray, a sticky Fablon plastic, greenhouse washable paint or try www.keylinegraphix.co.uk window films. Houseplants on the windowsill look good and block some of the view.

First make sure that you have blocked up any holes in the fence which allow other cats through. Food left down for hedgehogs or birds may attract visiting cats. Food for your own cat, placed too near  a non-microchip cat flap may also attract other cats. Dry earth/sand may attract cats that want to defecate there – get rid of every single poo and wash over with biological washing liquid 1/10 with water.

To prevent a cat intruding into your garden, some people recommend using anti-burglar plastic spikes called prickler strips but these may be illegal, as they might cause harm to a burglar or (worse) a child climbing over the wall. They may also be ineffective for some cats.  It is essential that if you do want to try these, you consult your local crime prevention officer first about their legality. What is legal is the use of prickly plants like Berberis planted next to the wall and allowed to flop over.  Attaching trellis to the wall your side will make it higher and will partly shut out the sight of the neighbouring cats. Protectapet supply cat proof fencing. 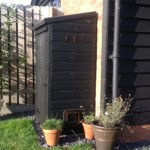 Shed with microchip flap and pots

“Make your own cat some high up sitting places, like a shelf in the branches of a tree, where he can sit and look outward across the garden,” says Jon Bowen vet and behaviour counsellor of the Royal Veterinary College. “It is important that these are made facing away from the house, with the view into the house blocked, so that the bully cannot use them to stare in.”

Putting some plant pots/garden furniture near the outside of the cat flap may help your cat as she comes out to take a look. It gives her some protection.  Occasionally, however, these may be sprayed on by the neighbourhood bully and thus may increase stress for your cat.  If you think the bully is spraying on the wall near your own cat’s flap, or on the door to the garden, then clean up thoroughly by scrubbing with biological washing liquid followed by surgical spirit.

“It may also help to make a series of cat latrines round the edge of the garden,’ says Jon Bowen. “Dig a two foot deep hole, fill with one third gravel and then top up that last third with soft playground sand. You can flush away urine but you will have to pick up poo regularly.” Put your own cat’s poo there first to establish whose territory it is. The Cat (Anonymous, 2013), Cats Protection’s magazine, suggests a motion-activated water sprinkler or using a water pistol on intruding cats while you yourself are hidden, so that the intruding cat will avoid the garden rather than just avoid you.

Cats that are frightened by neighbouring cats must have a litter tray indoors so that they do not have to go through enemy territory to eliminate.

Finally, if you are not sure if your cat is the victim or the perpetrator, it is possible to hire a CCTV camera and find out! Expensive but in some circumstances it might be worth it.

FURTHER IDEAS TO PROTECT YOUR CAT

The following organisations may be able to help with fencing –  www.PurrfectFence.com , www.katzecure.com, www.colourfence.co.uk (metal fencing painted like wood) or ProtectaPet. PVC drain piping on top of a wooden or chain link fence can be used to prevent escape –www.kittyklips.com 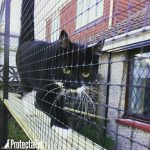 An enclosure in the garden might be a possibility – flat packs from www.omlet.co.uk . Simon Davies of ProtectaPet offers a free cat enclosure design service with DIY options. Send photos and garden measurements and what you require. Also, www.woodenart.org.uk, www.flytesoffancy.co.uk, www.shedcetraltd.co.uk,  www.penthouseproducts.com, Felisafe, and various runs including a build-your-own from www.grangepetcentre.co.uk I have no personal experience of any of these, so I suggest you look at more than one site before making up your mind.

If doing it yourself, consult – Fencing your Garden on www.icatcare.org

IF YOUR CAT IS THE BULLY

If your cat has not been neutered, get him fixed quickly. Neutered cats are less likely to be bullies. Finally, give this information sheet to your neighbours to help them take precautions such as not leaving food down and keeping the cat flap closed at night. Try and work out a timeshare arrangement if all else fails.

It’s worth trying to be nice to your neighbour about this because ill feeling can escalate. Retired teacher  kidnapped his neighbour’s cat, Tiggy, and drove him six miles before letting him out into the countryside. First he put him in a cat carrier and phoned the owner to say he had him but she was out, and then he dumped him. Then he tried to get him back by putting an advert into the local paper. He was angry because Sam kept being aggressive to his own cat, Monty’s Double. The RSPCA prosecuted him and magistrates ordered him to pay £100 compensation.

There are no easy solutions, alas.