WHAT SIZE HUTCH DO MY RABBITS NEED? 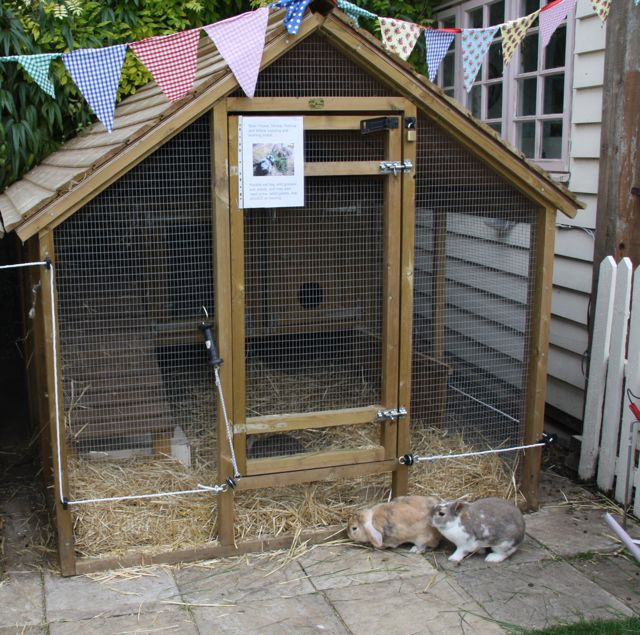 This is a good sized hutch.

Most rabbits live in hutches that are too small for them and most of these smaller hutches were bought in pet shops. The result is that some pet rabbits are in worse conditions than laboratory rabbits (Mullan & Main 2006).

In small hutches, rabbits suffer from loneliness, lack of exercise, and sometimes chronic arthritic pain if they spent long hours immobile for lack of space. They may also start developing bad habits such as repetitive hair chewing, head swaying and pawing because they have nothing else to do (Gunn & Morton 1995). 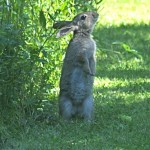 Room to stand up high

The hutches sold in pet shops are often too small for an average rabbit.  So called “starter” hutches are always too small – never buy them. Small hutches are bad for rabbit welfare (Dixon et al., 2010). Rabbits must be able to stand up high and to lie down at full length.

Think BIG when buying your rabbit’s home. Minimum size for a medium rabbit is 6′ x 2′ x 2.5′ (AFR 2014). If you have two rabbits (and you should have two) double that. A rabbit needs a sleeping compartment, and an eating area. As well as this, there should be an exercise run. The bigger the breed, the bigger the house and run. A giant breed may stand up to one metre high so needs a lot of space. Giant breeds need giant houses – Wendy houses, garden sheds with runs, aviaries, summer houses. 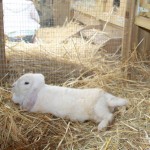 Room to lie down flathouses, dog kennels with runs, or even chicken houses with runs offer more room than the traditional hutch. A walk-in rabbit house will make cleaning easy.

Buy the biggest in stock or better still order an even bigger one. . A bigger breed will need more space. Double the space for two rabbits. A rabbit should be able to take three hops from one side of the hutch to another and be big enough for the rabbit to sit upright and lie down extended like the photos on the right (Welsh Assembly Government 2009). The hutch or house also needs space for a hay rack, a food bowl, a water bowl and a litter tray. If you are making your own rabbit house, remember to secure it against predators like foxes and badgers. 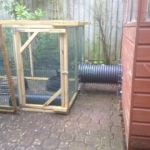 A shameful 18% of UK rabbits don’t have anywhere to exercise (PDSA 2013). So in addition to a hutch your rabbit will need a run. Too many rabbits are given runs that are just too tiny for good welfare (Mullan & Main 2006). Many of these have wire mesh floors which are known to create foot problems for rabbits kept on them for extended periods of time (De Jong et al., 2008). Minimum size for a run for medium size rabbit should be 8ft x 4ft x2 ft (AFR 2014).

Ideally the run should be attached to the hutch if the rabbit is living outside. If not, then the rabbit should be put in the run for several hours every single day and there should be an area within the run sheltered from sun, or rain, or wind. Take a look at Runaround, a system which links hutches to runs and provides binky boxes or RunAbout which makes custom as well as standard runs. An attached run should have paving stones underfoot to prevent mud – bark chippings may be poisonous. Paving stones can be swept and washed regularly. There’s a good manufacturer of hutches and runs here, here and here.

Location matters. Rabbits have very sensitive hearing and should not have to live in an area where there are loud noises, machinery noises or barking dogs (McBride 2014).

WHAT SHOULD I PUT ON THE FLOOR OF THE HUTCH?

Hay is the bedding which seems best to prevent sore hocks developing (Mancinelli et al., 2014) . A deep layer of soft barley straw is the warmest bedding for an outside hutch. A layer of hay over this would be ideal. Rabbits prefer straw or paper bedding to wood shavings or sawdust on the floor (Turner et al., 1992,cited in Boers et al., 2012) and sawdust is bad for them anyway. However you could put wooden shavings (not bark chippings) below the straw,  particularly in the latrine area (if you are not going to litter train your rabbit) or special rabbit litter. But the shavings must not be pine shavings. Indoor house rabbits don’t need such a large amount of straw and some people just put a fleece in their sleeping area.

DOES A HOUSE RABBIT NEED A HUTCH?

An indoor house rabbit needs a secure den where he can retreat for privacy and sleep. This must be lockable, so that the rabbit can be locked in at times for his own safety. Depending on the size of your rabbit, a crate sold for dogs might be the ideal. This must be big enough to contain a sleeping box, food bowl, hay rack, water bowl and litter tray. Crates are useful for taking in the car or on visits.  Plastic dog beds turned upside down make nice bunny retreats in rooms away from the bunny’s den. Take a look at the RunAbout Runs website for ideas.

Rabbits have eyesight adapted to twilight, so do not make them live in brightly lit areas. They also have sensitive hearing so their den should not be in a noisy area (McBride 2014).

PDSA (2013) The State of our Pet Nation. Available at  https://www.pdsa.org.uk/pet-health-advice/pdsa-animal-wellbeing-report Accessed December 12 2013.

Welsh Government, (2009), ‘Code of Practice for the Welfare of Rabbits,’ Accessed at http://wales.gov.uk/topics/environmentcountryside/ahw/animalwelfare/pets/codesofpractice/codeofpractocewelfarerabbits/