RABBITS: HOW TO HAVE A HAPPY BUNNY 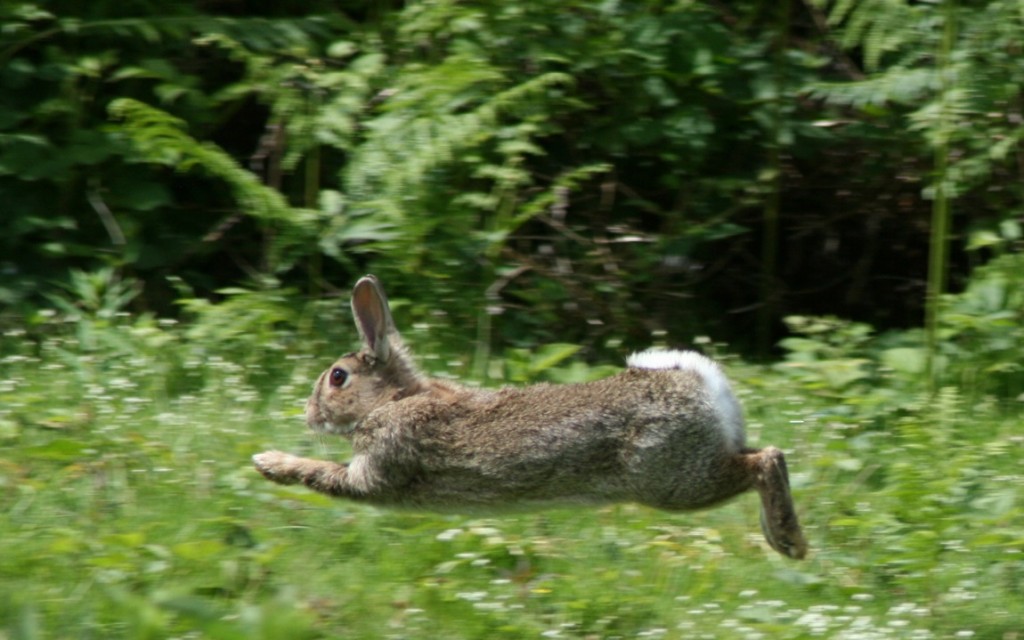 Wild rabbits live in a groups usually  in a rabbit warren (Cowan 1987). They are social and gregarious animals. Because they originate in Spain, their digestive system is designed to process dry sparse vegetation with lots of fibre rather than rich lush cornfields. Their teeth are adapted to do a lot of chewing and gnawing.  If they don’t get enough to chew, their teeth overgrow, sometimes slowly growing back into the head (McBride 1988). Rabbits run. Rabbits sit up on their hind legs to eat branches. They jump like the wild rabbit photographed above. The average rabbit territory is two thirds of an acre (0.25 ha) (Surridge et al l996)

We keep them in solitary confinement in hutches sometimes so small there is only enough space to hop once or twice and no room to sit up properly (Rooney et al., 2004). We overfeed them with rich mix without enough fibre, which destroys their health. Pet rabbits often suffer tortures from arthritis (no exercise), overgrowing teeth (not much to chew), and are eaten alive by fly strike maggots (wrong diet and filthy hutches). More than six out of ten rabbits in the UK live without the company of another rabbit (PDSA 2013). They die early because of solitary living (Scheper et al., 2009).  No wonder many rabbits develop behaviour problems (McBride, 1997). 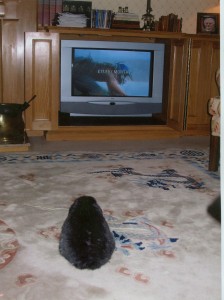 We are only just beginning to pay proper attention to the welfare of pet rabbits, although plenty is known about laboratory rabbits (Manning et al., 1994) and about wild rabbits (Thompson & King 1994). The house rabbit movement has helped spread the idea that rabbits deserve much more space and human attention. Pet rabbits have a lifespan of about 10 years (McBride 2014)

The better you house your rabbits, the happier they and you will be (Normando & Gelli 2011).

Because there is a shortage of properly scientific information, I have tried to reference my rabbit pages with the names and dates in brackets which match the list of references at the end. If you are an ordinary reader, don’t let this worry you. Many companion animal courses ignore rabbits so I hope this will inspire would-be behaviour scientists to study them further and persuade rabbit keepers that the traditional way of keeping them in hutches without runs is no longer good enough.

Scroll down for the various topics. Sometimes there is more than one topic on a page, so scroll down if the topic you want isn’t at the top of the page. Several photos show wild rabbits rather than pets to remind us that pet rabbits need to do the same things as wild ones. Download a good starter guide to keeping rabbits here. And a good rabbit behaviour download here. After the topics, come the references, and then a list of really good rabbit websites

PDSA (2013), The State of Our Pet Nation. Available at https://www.pdsa.org.uk/get-involved/our-current-campaigns/pdsa-animal-wellbeing-report Accessed May 2 2015

PDSA (2013), The State of Our Pet Nation. Available at https://www.pdsa.org.uk/get-involved/our-current-campaigns/pdsa-animal-wellbeing-report Accessed May 2 2015

THE RABBIT WELFARE ASSOCIATION – http://www.rabbitwelfare.co.uk – The place to start for all rabbit information. There’s lots on here.
RABBIT ADVOCATES – http://www.adoptarabbit.org
An American website with an archive of useful information – litter tray training, poisonous plants, safe plants and rabbit behaviour.
RABBIT BEHAVIOUR PROBLEMS www.rabbitbehaviour.co.uk – A website set up by three expert rabbit behaviourists, who will answer rabbit behaviour problems for a fee.
COTTONTAILS www.cottontails-rescue.org.uk
A good rabbit rescue with information about introducing rabbits to each other, aggressive rabbits, and starting a rescue.